Palestine’s Membership at the International Criminal Court: What It Could Mean for Israel 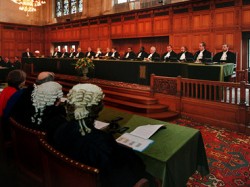 With Resolution A/67/L.28 on the Status of Palestine at the United Nations having been passed with an overwhelming majority at the General Assembly on November 29, 2012, the Palestinian Authority’s status has been upgraded from a United Nations permanent observer entity to that of a non-member observer State. Although the Resolution does not necessarily mean that all States, including the nine that voted against the Resolution and the forty one that abstained, must now recognize Palestine as a State, it does mean that Palestine will have access to United Nations and agencies, including the International Criminal Court.

For many observers, this has been hailed as a great triumph for Palestine, and some commentators anticipate that Palestine will seek membership at the International Criminal Court in order to file claims against Israeli officials for the Gaza blockade, disproportionate attacks against and collective punishment of Palestinians, and the occupation of the West Bank. However, as discussed on my latest contribution to The Desmond Tutu Peace Foundation, seeking membership at the Court will prove to be a double-edged sword for Palestine. For the full article and analysis, visit The Desmond Tutu Peace Foundation by clicking here.