A. Introduction
One of the arguments raised by Muammar Gaddafi in the recent Libyan revolt is that the conflict Libya faces is a purely domestic conflict against local and foreign criminals seeking to destabilize Libya. He holds that under the historic principle of nonintervention, foreign nations have no right to intervene in the affairs of Libya. This argument has been reiterated by leaders of other nations in the Middle East. Ali Abdullah Saleh of Yemen chastised President Barack Obama for intervening in the affairs of Arab nations, where he stated:

Does the principle of nonintervention shield Middle Eastern leaders when they resort to violence in quashing domestic unrest and protests? Do the arguments of Gaddafi and other leaders hold sway?

B. The Principle of Nonintervention
As discussed in Malcolm Shaw’s standard reference work International Law, it is a principle of customary international law that states and international organizations may not interfere or intervene in matters within the domestic jurisdiction of other states (see § 5 of Chapter 20). Intervention is “prohibited where it bears upon matters in which each state is permitted to decide freely by virtue of the principle of state sovereignty” (p. 1039). This principle is enshrined in the Charter of the United Nations (CUN), which states: “Nothing contained in the present Charter shall authorize the United Nations to intervene in matters which are essentially within the domestic jurisdiction of any state or shall require the Members to submit such matters to settlement under the present Charter” (art. 2.7 CUN). 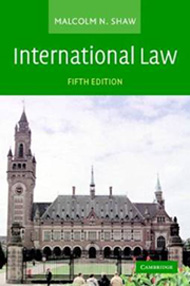 Under this historic principle, state action with respect to purely domestic affairs have traditionally been shielded by immunity in the international arena. This has been the case even when state acts violate the rights of the state’s own people. International law historically would only apply when foreign nationals fall victims to the crimes of a state.
After World War II, however, this changed. Due to the atrocities committed in the war, the Allied Powers made a firm decision not to allow the German and Japanese authorities responsible for war crimes, including those who committed such crimes against their own citizens, to go free through the application of the principle of nonintervention, since doing so would be a miscarriage of justice. Under this exception to the principle of nonintervention, the Nuremberg International Military Tribunal and the International Military Tribunal for the Far East were established to try the war crimes of Nazi Germany and Imperial Japan, respectively.

Practice thus departed from precedent with the establishment of these military tribunals. Since then, in cases involving the most egregious crimes, international human rights law has ignored the principle of nonintervention. Under current practice, states are obliged under their human rights treaties to respect the rights of both their own citizens as well as aliens within their borders, and other states or international organizations may intervene to assure that these rights are respected if a state fails to insure them. The CUN incorporates this premise when articulating an exception to the general rule of sovereignty: the principle of nonintervention “shall not prejudice the application of enforcement measures under Chapter VII [of the Charter]” (art. 2.7 CUN).

C. Does the Principle of Non-Intervention Protect Leaders who Violently Quash Civilian Protestors?
It is thus incorrect to argue that leaders may resort to the principle of non-intervention for blanket protection of their actions during even purely civil conflicts. Muammar Gaddafi as well as other leaders in the Middle East should take the prosecutions of civil and military leaders under the International Military Tribunal, as well as its more recent counterparts, such as the International Criminal Tribunals for Rwanda and for the former Yugoslavia, the Special Court for Sierra Leone, the Human Rights Chamber for Bosnia & Herzegovina, and the International Criminal Court, among others, as warning signs that they too may be held accountable for crimes committed against their own populations.

D. The Duty of the International Community to Act
Not only may nations under international law be permitted to intervene to stop crimes committed against foreign populations by foreign governments, but also, they may under some circumstances be under an affirmative duty to do so.

Furthermore, applicable human rights instruments may require action by member states under their own commitments. For example, under the International Covenant on Civil and Political Rights (ICCPR), states parties undertake to protect the wide range of civil and political rights listed in the ICCPR, including a right to life and prohibitions on torture and slavery. The ICCPR requires states not only to agree to not violate these rights, but also to insure the rights by protecting them from other member states’ violations. It thus incorporates an affirmative duty to act.

There are many more examples. We can point to the Convention on the Prevention and Punishment of the Crime of Genocide (CPPG) (1948), which creates an affirmative duty to act. It requires not only that its 140 states parties refrain from the crime of genocide, but also that they “undertake to prevent and to punish” genocide (Art. I CPPG) and further pledge “to grant extradition in accordance with their laws and treaties in force” of persons charged with genocide (Art. VII CPPG).

E. Conclusion
We may thus conclude not only that there is a deep and inherent fallacy in invoking the largely obsolete principle of non-intervention in cases involving the worst crimes against civilian populations, but also, that there is a duty of third party states under international law to act to stop the commission of such crimes.
Posted by John M. B. Balouziyeh at 10:53 AM