Sun Tzu's classic, "The Art of War": in some ways outdated, in others, prophetic 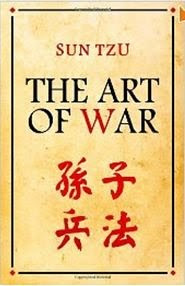 A. Overview
The ancient Chinese military general Sun Tzu lays out a blueprint for the effective waging of war. In his classic The Art of War, the successful war campaign largely revolves around two key elements: deception and surprise. Sun Tzu also describes the virtues that are required of effective military leaders, and, drawing from his many years of military experience, he gives wide ranging and insightful advice on knowing oneself, knowing one’s enemy, and how to keep the spirits of one’s soldiers fixed on victory. Throughout his treatise, his words are piercing, direct, at times witty, and often paradoxical. He writes, for example, “If your opponent is of choleric temper, seek to irritate him. Pretend to be weak, that he may grow arrogant” (I.22). “Simulated disorder postulates perfect discipline, simulated fear postulates courage; simulated weakness postulates strength” (V.17).

1. Virtues Necessary for a Successful War Campaign
The Commander is to be an exemplar of five virtues: wisdom, sincerity, benevolence, courage and strictness (I.9). Discipline among the Commanders and soldiers is the key to victory. One can even determine which side in a war will be victorious by asking “(1) Which of the two sovereigns is imbued with the Moral law? (2) Which of the two generals has most ability? (3) With whom lie the advantages derived from Heaven and Earth? (4) On which side is discipline most rigorously enforced? (5) Which army is stronger? (6) On which side are officers and men more highly trained? (7) In which army is there the greater constancy both in reward and punishment?” (I.13).

2. The Law of Deception
The Law of Deception is summarized by Sun Tzu with these words: “All warfare is based on deception. Hence, when able to attack, we must seem unable; when using our forces, we must seem inactive; when we are near, we must make the enemy believe we are far away; when far away, we must make him believe we are near” (I.18-19).
Sun Tzu goes to great lengths in justifying this assertion and in giving examples of how to deceive and to detect deception from the enemy. He writes, “Humble words and increased preparations are signs that the enemy is about to advance. Violent language and driving forward as if to the attack are signs that he will retreat” (IX.24), but “Peace proposals unaccompanied by a sworn covenant indicate a plot” (IX.26). “At first, then, exhibit the coyness of a maiden, until the enemy gives you an opening; afterwards emulate the rapidity of a running hare, and it will be too late for the enemy to oppose you” (XI.68).

3. Law of Surprise Attack
Surprise is also an important element in weakening the enemy. The military is to “[a]ppear at points which the enemy must hasten to defend; march swiftly to places where you are not expected” (VI.5), and, “[i]n raiding and plundering, be like fire, in immovability like a mountain” (VII.18). “Let your plans be dark and impenetrable as night, and when you move, fall like a thunderbolt” (VII.19).

4. Effective Warfare
The rest of the treatise focuses on how to wage war in an effective manner. War is to be waged by first knowing oneself and knowing one’s enemy. Battle is never undertaken unless one is certain that he will win. Sun Tzu outlines the five principles of victory: “(1) He will win who knows when to fight and when not to fight. (2) He will win who knows how to handle both superior and inferior forces. (3) He will win whose army is animated by the same spirit throughout all its ranks. (4) He will win who, prepared himself, waits to take the enemy unprepared. (5) He will win who has military capacity and is not interfered with by the sovereign” (III.17).
A successful war campaign is waged efficiently, with the Armed Forces knowing when and how to attack by expending as little effort as possible, for “supreme excellence consists in breaking the enemy's resistance without fighting” (III.2). Few resources are to be expended in an effective war campaign: “The skillful soldier does not raise a second levy, neither are his supply-wagons loaded more than twice” (II.8).
Sun Tzu also seems to hint at a metaphysical plane in which warfare is fought. He writes, for example, that the effective Commander “wins his battles by making no mistakes. Making no mistakes is what establishes the certainty of victory, for it means conquering an enemy that is already defeated” (IV.13), as though war is first fought on some metaphysical plane before the victory and defeated is reflected in the visible, physical world.

B. Critique
Some of Sun Tzu’s counsel is outdated in the age of terrorism, military insurgencies, and digital and nuclear warfare. Some of Sun Tzu’s council revolves around the size and numbers of the enemy’s forces and one’s advantage relative to the enemy based on numbers. Similarly, much of his advice is based on obsolete forms of land warfare that are rarely fought in the modern day. He writes, for example, “Whoever is first in the field and awaits the coming of the enemy, will be fresh for the fight; whoever is second in the field and has to hasten to battle will arrive exhausted” (VI.1). This advice will rarely, if ever, be relevant in an age where most warfare is fought in the air or from long range missiles, with forces rarely clashing in land battles.
The advent of nuclear weapons also changes the entire equation of relative forces and makes the numbers of infantrymen almost irrelevant. Similarly, the introduction of insurgencies that blend into local populations have been able to render even large armies of well equipped soldiers ineffective and unsuccessful. Furthermore, the advent of digital and cyber-warfare makes the numbers of enlisted and commissioned soldiers largely irrelevant to foreign attacks.
Though the forms of warfare have changed over the ages, many of Sun Tzu’s principles continue to apply. Whether fighting a land battle or an air battle, the laws of deception and surprise attack are still relevant and highly effective. Furthermore, Sun Tzu outlines lessons that are important not only for the battlefield, but also for the general struggles of life. He writes, “You can be sure of succeeding in your attacks if you only attack places which are undefended. You can ensure the safety of your defense if you only hold positions that cannot be attacked” (VI.7). This is advice that should be heeded by businessmen, political leaders, and anyone else in a position that requires defending against an onslaught of attacks or competition.
Posted by John M. B. Balouziyeh at 9:09 AM